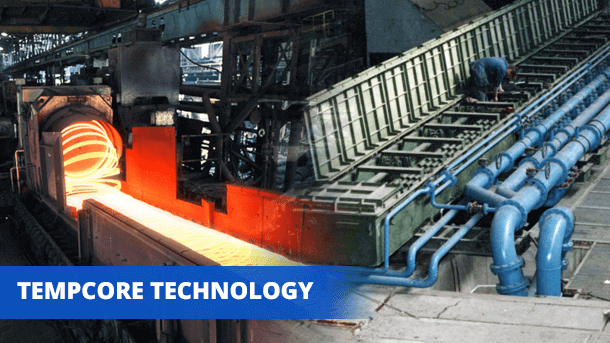 The market of TMT bar has changed drastically over the last few years mostly due to the advancement in technology. A decade back, CTD (Cold Twisted Deformed) technology, regarded as the best in the market but in the previous few years they got replaced by Tempcore technology mostly due to its cheaper production cost with better strength property.

The Tempcore is now considered as one of the most efficient production process developed in Belgium. Certain brands like Toptech brought the technology to India by tying up with the Belgian production industry. The technology works on the process of Heat treatment principle. The final product obtained as a result of the process has better quality, and more advantages over traditional manufacturing processed TMT bar.

The TMT or Thermo Mechanically Treated reinforcements gain more strength and sturdiness once it goes through the heat treatment. The resistance to bars is not imparted not only due to heat treatment, but the strength also gets incorporated in bar mostly due to rapid cooling. The process does not end once it gets cooled; it’s reheated once again at a very high temperature and subsequently compressed to obtain a product of unparalleled strength and flexibility.

After the treatment process gets done, now comes the process of shaping the product according to the standard size chart. The steel billets are rolled through mills and given the desirable size and shapes. After all the process as mentioned earlier gets done, now comes the renowned Tempcore technology into play. The technique consists of three parts:

The bars produced by the mentioned process have higher strength due to its tempered surface layer.

How Do You Construct A Home With A Rainwater Harvesting System?
August 10, 2022

How to Measure the Strength in a TMT bar?
April 5, 2022
Recent Topics

Become a Toptech dealer and enjoy Exclusive benefits! Please fill-up the
details below. We will call you in next 24 hrs.

Our Spring Sale Has Started

You can see how this popup was set up in our step-by-step guide: https://wppopupmaker.com/guides/auto-opening-announcement-popups/